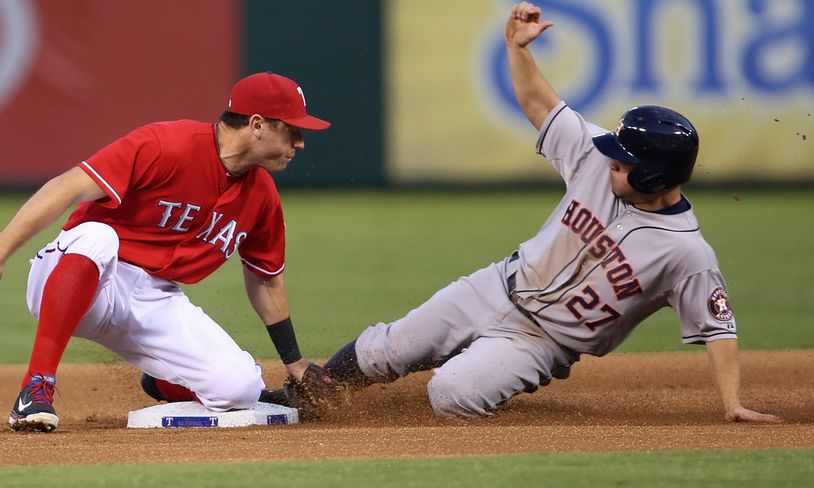 In the United States, sports are televised on various broadcast networks, national and specialty sports cable channels, and regional sports networks. U.S. sports rights are estimated to be worth a total of $22.42 billion in 2019, about 44 percent of the total worldwide sports media market.[1] U.S. networks are willing to pay a significant amount of money for TV sports contracts because it attracts large amounts of viewership; live sport broadcasts accounted for 44 of the 50 most watched U.S. TV broadcasts in 2016.[2]

Among these TV contracts, NBC holds a $7.75 billion contract, signed in 2014, to air the Olympics through the 2032 games,[3] making it a major source of revenue for the International Olympic Committee.[4] The broadcast deals of the National Collegiate Athletic Association (NCAA), running through 2032 across various networks, were worth $8.8 billion in 2018.[5]

The U.S. is home to four of the top six professional sports leagues by revenue in the world: Major League Baseball (MLB), National Basketball Association (NBA), National Football League (NFL), and National Hockey League (NHL). The NFL has the largest TV contracts, and earns over $6 billion annually from its contracts with Fox, CBS, NBC, ESPN and DirecTV for the 2014 through 2022 seasons.[6] MLB earns $1.5 billion annually from its contracts signed in 2012 with ESPN, Fox, and Turner Sports (TBS) for the 2014 through 2021 seasons.[7] In 2014, the NBA signed a nine-year television deal with ABC/ESPN and TNT that generates annual league TV revenues of $2.66 billion beginning with the 2016–17 season,[8] while the NHL earns $200 million annually from a 10-year contract signed with NBC Sports in 2011 that runs through the 2020–21 season.[9]

Since the 1960s, all regular season and playoff games broadcast in the United States have been aired by national television networks. Until the broadcast contract ended in 2013, the terrestrial television networks CBS, NBC, and Fox, as well as cable television’s ESPN, paid a combined total of US$20.4 billion[10] to broadcast NFL games. From 2014 to 2022, the same networks will pay $39.6 billion for exactly the same broadcast rights.[11] The NFL thus holds broadcast contracts with four companies (ViacomCBS, Comcast, Fox Corporation, and ESPN Inc.—which is majority owned by The Walt Disney Company, respectively) that control a combined vast majority of the country’s television product. League-owned NFL Network, on cable television, also broadcasts a selected number of games nationally. In 2017, the NFL games attracted the top three rates for a 30-second advertisement: $699,602 for Sunday Night Football, $550,709 for Thursday Night Football (NBC), and $549,791 for Thursday Night Football (CBS).[12]

For the 2020 NFL season, two extra wild card playoff games are being added to the schedule; CBS and NBC acquired rights to these new games, with both paying roughly $70 million each.[13]

Westwood One has exclusive national radio rights through the 2022 season.[27][28]

Sirius XM has exclusive satellite radio rights to home, away, and, if available, national broadcast radio feeds of all games. Also has rights to online streaming of games for its subscribers starting with the 2011 season.

College football coverage is dependent on negotiations between the broadcaster and the college football conference or team. The televised games may change from year-to-year depending on which teams are having a strong season, although some traditional rivalry games are broadcast each year. Some games are traditionally associated with a specific event or holiday, and viewing the game itself can become a holiday tradition for fans.

Post-season bowl games, including the College Football Playoff, are presently all televised, most of them by the ESPN networks.[29] The television broadcast rights to all six CFP bowls and the National Championship are owned by ESPN through at least the 2025 season.[30] ESPN then reached 12-year agreements to retain rights to the Rose Bowl, Orange Bowl, and Sugar Bowl following the dissolution of the Bowl Championship Series.[31] In November, ESPN reached a 12-year deal to broadcast the remaining three bowls, the championship game, as well as shoulder programming such as ranking shows; as a whole, the contract is valued at around $470 million per year, or nearly $5.7 billion for the life of the contract.[32]

Since 2013, ESPN’s networks have held rights to the Canadian Football League; the league’s domestic rights are held by TSN, a Canadian sports channel that ESPN holds a minority ownership stake in. This agreement was renewed in 2014 for five years, aligned with TSN’s domestic contract, with a stipulation that at least 17 games would be carried on an ESPN linear network each season (primarily ESPN2), including the Grey Cup. Originally ESPN3 carried all games not carried on one of the linear channels online, later ESPN moved those games to ESPN+.[37][38][39][40]

The new incarnation of the XFL divided its broadcast rights between ABC/ESPN and Fox Sports under a three-year deal. XFL games were split among ABC, Fox, ESPN, and Fox Sports 1 (with a small number of games scheduled for ESPN2 and Fox Sports 2). ESPN held rights to the championship game. The Wall Street Journal reported via inside sources that neither the broadcasters or the league made any upfront payments, but that the XFL sold the in-game sponsorship inventory. The networks covered the production costs, held the digital rights to their telecasts, and the right to sell the conventional commercial inventory during their games.[41][42] The league filed for bankruptcy and folded when the first season was cut short due to the Covid-19 pandemic. However, during the bankruptcy process, Fox expressed interest in broadcasting games if new owners could revive the league.[43] The league was sold to a group headed by actor Dwayne “The Rock” Johnson for $15 million.[44]

On August 28, 2012, it was announced that ESPN and Major League Baseball had agreed on a new eight-year deal that greatly increases the network’s studio and game content across all of its platforms. Also it will increased ESPN’s average yearly payment from about $360 million to approximately $700 million.[45] ESPN also will return to broadcasting postseason baseball beginning in 2014 with one of two wild-card games each season. The network will alternate airing the American League and National League wild-card games each year. It also will have the rights to all potential regular-season tiebreaker games starting in 2014.[46]

On September 19, 2012, Sports Business Daily[47][48] reported that Major League Baseball would agree to separate eight-year television deals[49] with Fox Sports and Turner Sports[50] through the 2021 season. Fox would reportedly pay around $4 billion over eight years (close to $500 million per year) while Turner would pay around $2.8 billion over eight years (more than $300 million per year). Under the new deals, Fox and TBS‘s coverage would essentially be the same as in the 2007–2013 contract with the exception of Fox and TBS splitting coverage of the Division Series, which TBS has broadcast exclusively dating back to 2007. More importantly, Fox would carry some of the games (such as the Saturday afternoon Game of the Week) on its all-sports channel, Fox Sports 1. Sources also said that was possible that Fox would sell some Division Series games to MLB Network, which did end up occurring.

On November 15, 2018, Fox renewed its rights, set to start in 2022, through 2028. The contract maintains Fox’s current coverage structure, but with expanded digital rights, and the commitment to air more games on the Fox broadcast network when the new deal takes effect.[51][52] Fox also committed to airing at least two of its League Championship Series games, as well as any Game 7, on the broadcast network beginning in 2019; it had been criticized for airing only Game 2 of the 2018 National League Championship Series, while placing the rest on Fox Sports 1.[53]

On June 13, 2020 Turner Sports renewed its rights, set to begin in 2022 and end in 2028. The new Contract will maintain Turner’s rights to its MLB Coverage including a move to a weeknight game and more postseason games including seven More Wild Card Games along with seven More Division Series games and seven more League Championship Series games. when the new deal goes into effect.[54]

ESPN Deportes has Spanish-language TV and radio rights to the Caribbean Series.

Post-season ESPN currently broadcasts the College World Series on its family of networks.

ESPN has rights to broadcast the entire Little League World Series, as well as the finals of the eight regional tournaments that determine the U.S. representatives in that competition. It distributes coverage among its family of networks and ABC; the final is aired on ABC.

MLB Network has a contract with MiLB to air one game each week.[58]

In 2013, the WNBA and ESPN signed a six-year extension on the broadcast deal to cover 2017–2022. In the new deal, a total of 30 games would be shown each season on ESPN networks. Each team would receive around $1 million per year.[62]

More than 300 hours of live curling, broadcast by TSN in Canada, will be live-streamed on ESPN3, including:

Tours and other events[edit]

On April 19, 2011, NBC Sports and the then-Versus channel announced they had reached a ten-year extension (through 2020–2021) to the television contract with the National Hockey League worth nearly 2 billion dollars over the life of the contract. As part of the announcement, the chairman of NBC Sports, Dick Ebersol announced that the Versus channel would be renamed “within 90 days,” in order to reflect the synergy of the two networks after the Universal–Comcast merger.[91] The said network was renamed the NBC Sports Network on January 2, 2012.[92]

The NWHL has announced a landmark partnership with Twitch that will see the platform become the exclusive live-streaming home of the women’s professional league.[94]

For the first time, Fox acquired the rights to the Travers Stakes.

ESPN aired Formula One from 1984 to 1997. Speedvision and Fox Sports Net shared broadcasting rights from 1998 to 2000. Speedvision and its successor Speed Channel continued to broadcast the championship until 2012. Fox aired select races from 2007 to 2012. NBC Sports had English-language TV broadcasting rights from 2013 through 2017. Races were televised by NBC, NBCSN or CNBC and streamed on NBC Sports Live Extra.[107][108]

ESPN became the new broadcaster in 2018. The network unveiled plans to show over 100 hours of F1 programming during their first season returning to the sport. This included plans to show every practice and qualifying session in some capacity. Race broadcasts would be spread across ESPN and ESPN2 with plans to show live coverage of Canada GP, the American and Mexican Grand Prix live on ABC while also showing the Monaco Grand Prix on tape-delay.[109] March 1 of that year they announced the launch of their own OTT service called F1 TV Pro what show races live and on-demand.[110]

NBC Sports has rights to all World Rugby international events through 2023, including:[115]

NBC Sports also has the rights to: